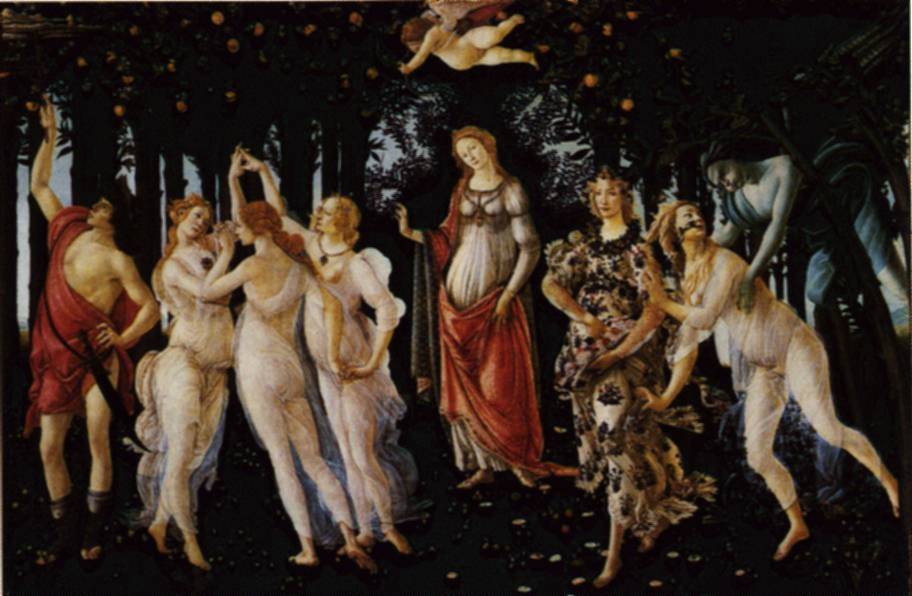 Copyright: http://www.ibiblio.org/wm/paint/auth/botticelli/botticelli.la-primavera.jpg
The Madonna Benois was painted about the same time 1478-1480

now in the Galleria degli Uffizi in Florence

At the right Zephyr, the warm wind of Spring, embraces the Roman goddess Flora, or perhaps the earth nymph Chloris, disphanously clad and running from his amorous clasp. She is shown at the moment of her metamorphosis into Flora, as her breath turns to flowers which take root over the countryside. Across from her, we see Flora as a goddess, in all her glory (or perhaps her daughter Persephone, who spends half her time beneath the earth, as befits the patron saint of flowers) as she steps forward clad in blossoms. In the centre is a gentle Venus, all dignity and promise of spiritual joy, and above her, the infant Cupid aims his loving arrows. To the left, the Three Graces dance in a silent reverie of grace, removed from the others in time also, as indicated by the breeze that wafts their hair and clothes in the opposite direction from Zephyr ‘s gusts. Mercury, the messenger of the gods, provides another male counterpart to the Zephyr. Zephyr initiates, breathing love into the warmth he brings to a wintry world, and Mercury sublimates, taking the hopes of humanity and opening the way to the gods.

Everything in this miraculous work is profoundly life – enhancing. Yet it offers no safeguards against pain or accident: Cupid is blindfolded as he flies, and the graces seem enclosed in their own private bliss. So the poetry has an underlying wistfulness, a sort of musing nostalgia for something that we cannot possess, yet something with which we feel so deeply in tune. Even the gentle yet strong colors speak of this ambivalence: the figures have an unmistakable presence and weight as they stand before us, moving in the slowest of rhythms. Yet they also seem insubstantial, a dream of what might be rather than a sight of what is.

Sandro Botticelli was not the only Florentine to be blessed or afflicted by an intensely anxious temperament. In the 1490 s, the city of Florence was overtaken by a political crisis. The Medici government fell, and there followed a four – year period of extremist religious rule under the zealot Savonarola. Either in response to this, or possibly out of some desire of his own for stylistic experimentation, Sandro Botticelli produced a series of rather clumsy – looking religious works — the San Bernabo Altarpiece is an example.