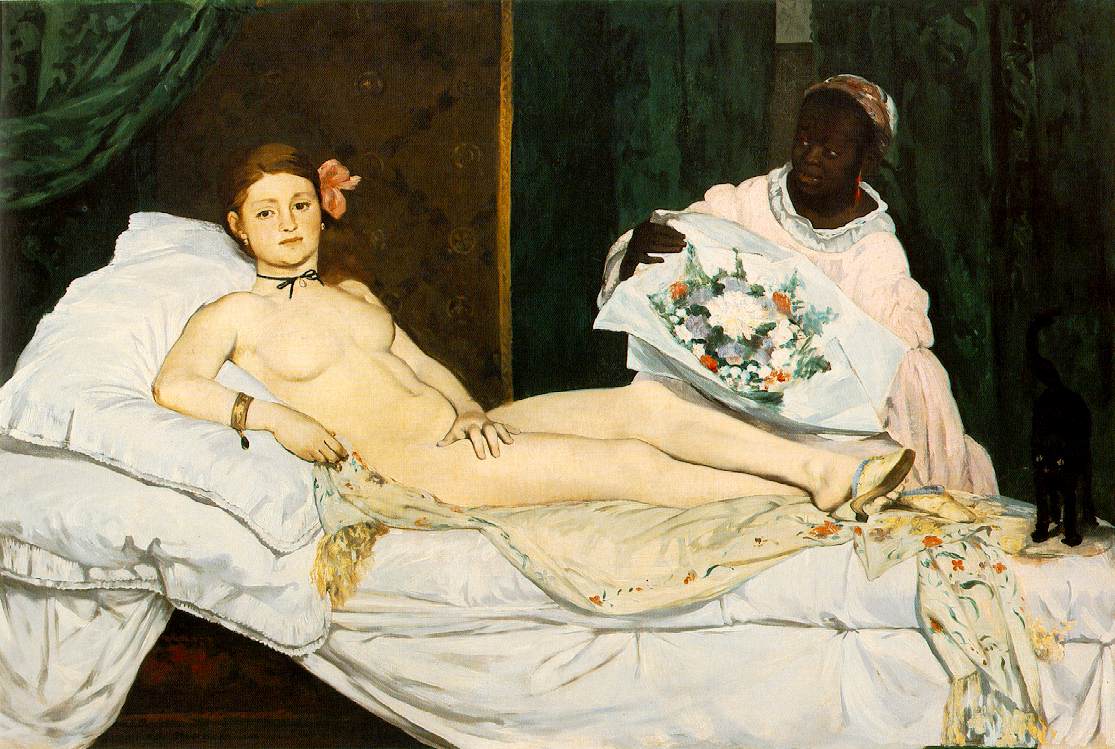 In this famous painting, Manet showed a different aspect of realism from that envisaged by Courbet, his intention being to translate an Old Master theme, the reclining nude of Giorgione and Titian, into contemporary terms. It is possible also to find a strong reminiscence of the classicism of Ingres in the beautiful precision with which the figure is drawn, though if he taught to placate public and critical opinion by these references to tradition, the storm of anger the work provoked at the Salon of 1865 was sufficient disillusionment. There is a subtlety of modelling in the figure and a delicacy of distinction between the light flesh tones and the white draperies of the couch that his assailants were incapable of seeing. The sharpness of contrast also between model and foreground items and dark background, which added a modern vivacity to the Venetian-type subject, was regarded with obtuse suspicion as an intended parody. The new life of paint and method of treatment in this and the other works by Manet that aroused the fury of his contemporaries had a stimulus to give to the young artists who were eventually to be known as Impressionists. In a more general sense, they rallied to his support as one heroically opposed to ignorant prejudice and their own ideas took shape in the heat of the controversy.

Olympia was the gift of a group of art lovers and painters to the Luxembourg in 1890 and was transferred to the Louvre in 1908.

As Praxiteles brought the motif of the feminine nude into ancient Greek art, so Giorgione and Titian re- create it for the art of the modern West. In 1538, at the height of his powers, Titian painted for the Duke of Urbino the Venus of Urbino which gives us the compositional essentials for the representation of a theme that will be popular for centuries. His version, based on an earlier and pioneering one painted by Giorgione, was to become official for paintings of the reclining nude, no matter how many variations would ensue. Venus reclines on a gentle slope made by her luxurious, pillowed couch, the linear play of the draperies contrasting with the sleek, continuous volume of her body. At her feet is a pendant (balancing) figure –in this case, a slumbering lapdog. Behind her, a simple drape serves both to place her figure emphatically in the foreground and to press a vista into the background at the right half of the picture…. All of the resources of pictorial representation are in Titian ‘s hands, and he uses them here to create original and exquisite effects. http://employees.oneonta.edu/farberas/arth/arth213/Titian_Venus_urbino.html

Slide 10: Couture The Romans of the Decadence

Slide 12: Cabanel The Birth of Venus

Born in Montpellier, France, 1823, Alexander Cabanel was probably best known as a teacher of the academic arts. From a family without the means to send their son to art school, at the age of eleven, he was awarded a grant to train in Paris at the School of Ecole des Beaux-Arts.

Alexandre entered his first Salon show at the age of twenty. Two years later he won second place in the Prix de Rome, enabling him to attend lessons in Rome studying the classical academic themes.